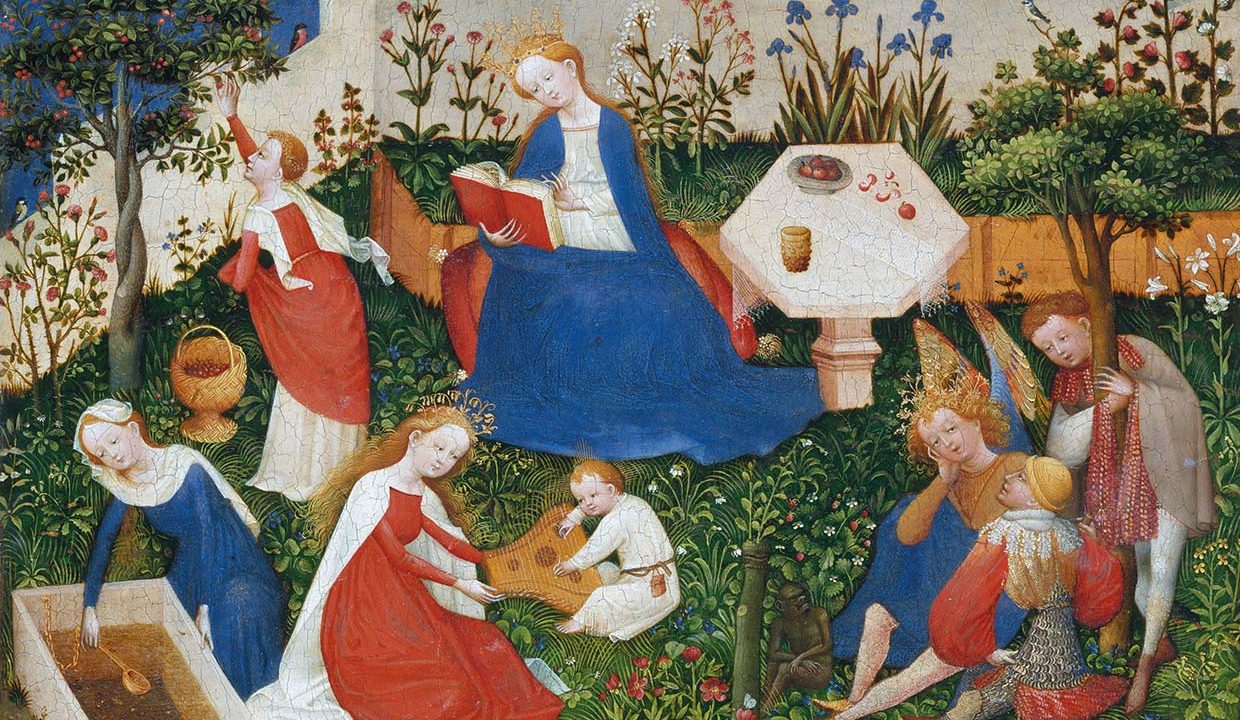 In the medieval period, the garden reflects the drastic social, cultural, political and economic changes produced by the fall of the Western Roman Empire. These factors determined, probably with the contribution of climatic changes, a strong decline in agriculture, floriculture and fruit growing. In fact, when the garden is left to itself and prey to enemy raids, it tends to disappear quickly reabsorbed by nature. The ancient gardens remained in the collective imagination only through literary and mythological descriptions of the Greek and Roman world such as the topos of the locus amoenus and the Elysian Fields or through naturalistic works such as those of Varro and Pliny. In medieval thought among the great archetypal models of the garden we can consider five as the main ones. The model of the garden of Alcinoo on the island of Feaci (Odyssey, VII, vv. 112-132) and that of the hanging gardens of Babylon linked to the seven wonders of the ancient world, are of a profane nature. The model of the biblical Eden as paradisus voluptatis , that of the hortus conclusus (Song of Songs) and the model of the garden of Joseph of Arimathea , the place of Jesus’ sepulcher and where, in the form of hortulanus (gardener), he appears to Mary Magdalene after the resurrection (Jn 20, 15 ), are of a sacred nature. Two of these, Eden and the Elysian Fields, converging will give rise to the concept of Paradise which will then be used as a paradigm in the construction of every garden.

At the dawn of the Middle Ages, a very strong need for protection developed so that, having to live in fortified environments such as villages and castles, green spaces were relegated to small spaces and mainly used for subsistence. In monasteries and abbeys , centers where knowledge is preserved and transmitted, the concept of the garden begins to develop again, especially as hortus conclusus, by high walls and frequently with a central fountain (symbol of Christ as a source of life). The structure of the monastic garden keeps the subdivision of the gardens of the Roman villas almost unchanged and was codified in the year 534 in the Rule of St. Benedict of Nursia. There were four main areas , one dedicated to the cultivation of vegetables ( horti ), one to fruit trees ( pomaria ), one to gardens with trees and ornamental plants ( viridaria ) and finally one with medicinal herbs ( herbaria ). & nbsp; Medieval thought sees the hortus conclusus as a symbol of the bride, the Church and the Virgin Mary. Among the plants and floral species with the deepest symbolic connotation we find the rose (symbol of the Virgin and divine blood), the lily (purity) and the palm tree (justice and glory).

In later times the medieval garden, also as hortus conclusus , also developed in castles and more rarely in city palaces. With respect to the Benedictine rule, the viridaria is privileged, which takes the name of verziere or garden of delights and becomes the fulcrum of court life and setting for important political and social events . Here knights and ladies danced, chatted, listened to music and played cards or chess. An imaginary place, artistic archetype and literary topos became the ideal stage for chivalrous deeds and courtly love and described in countless literary works , poetry, songs and depicted in frescoes and miniatures. As a garden dedicated in particular to pleasure, it was progressively enriched with statues, benches, pavilions, aviaries and an intimate and secluded area called the secret garden which formed its heart. The other areas such as the orchard and the actual vegetable garden become secondary as well as the Herbolarius often reduced to a flowerbed and a few pots of aromatic and medicinal herbs which took the name of garden of the simple.

AThe canonical medieval garden sees its maximum splendor between the thirteenth century and the first half of the fifteenth century , when it slowly begins to be overtaken by the Italian garden, a celebration of geometry. In the full and mature meaning, the hortus conclusus was a closed and protected space, with square-shaped flowerbeds bounded by fences of woven reeds in a checkerboard pattern or by low hedges, with large caissons delimited by trunks or low walls. dry full of plants, connected by squared paths and scattered with trees with geometric prunings according to the classic canons of ars topiaria in use since republican Rome. In the gardens of the most sumptuous castles it was not uncommon to also find swans and peacocks in the wild or aviaries and menageries of rare and exotic animals. Essential and ever-present architectural elements were the pavilion set up for court celebrations and the pergola in and with climbing roses background typical of every amorous meeting.

Unfortunately, no medieval garden has been preserved in its original form . We can derive its characteristics only from poems, songs or literary sources of the late medieval period, for example in the Divine Comedy when Dante describes the garden of Eden or in the works of Boccaccio who first describes the garden as a place of leisure and lightness, where we eat, dance, play. There are also some pictorial representations such as the splendid cycle of frescoes by Hall of the Pavilion in the Vignola Castle in Modena or those of the numerous illuminated manuscripts and books which, unfortunately, are highly idealized and unrealistic in spite of the amount of detail.

A well-kept reconstruction of a monastic garden is located in France at the priory of Notre Dame d’Orsan in the Cher department.

In Italy there are numerous reconstructions, some of particular importance for their beauty and historical accuracy:

The medieval garden of Palazzo Madama (Turin) where, alongside the characteristic division of the Benedictine rule, traditional structures such as the falconara can also be visited.

The garden of Rocca di Angera (Varese) which dominates the southern shore of Lake Maggiore, expression of a study on illuminated manuscripts and particularly in-depth documents on the symbolism of the hortus conclusus.

The medieval garden in the abbey complex of San Pietro in Perugia, seat of the Faculty of Agriculture. It is a reconstruction based on medieval numerology and Benedictine conceptions that saw in every aspect of nature a tangible sign of God. It is a monastic garden that contains a botanical garden, a representation of the Earthly Paradise, a testimony of the symbolic and spiritual value of plants in the Middle Ages as the olive tree (tree of light and science), the fig tree (the plant of Good and Evil), the cypress (connection of the Earth with the Divine), the pine (the tree of the wizard Merlin), the oak (the tree of the cross) just to name a few.

The medieval garden of Orsini castle in Vasanello (Viterbo) with native plants, prior to the discovery of America, and reconstructed on the basis of two important documents: the 756 plan of the Abbey of San Gallo and the Capitolario De Villis of Charlemagne.

« “The garden in ancient Rome” 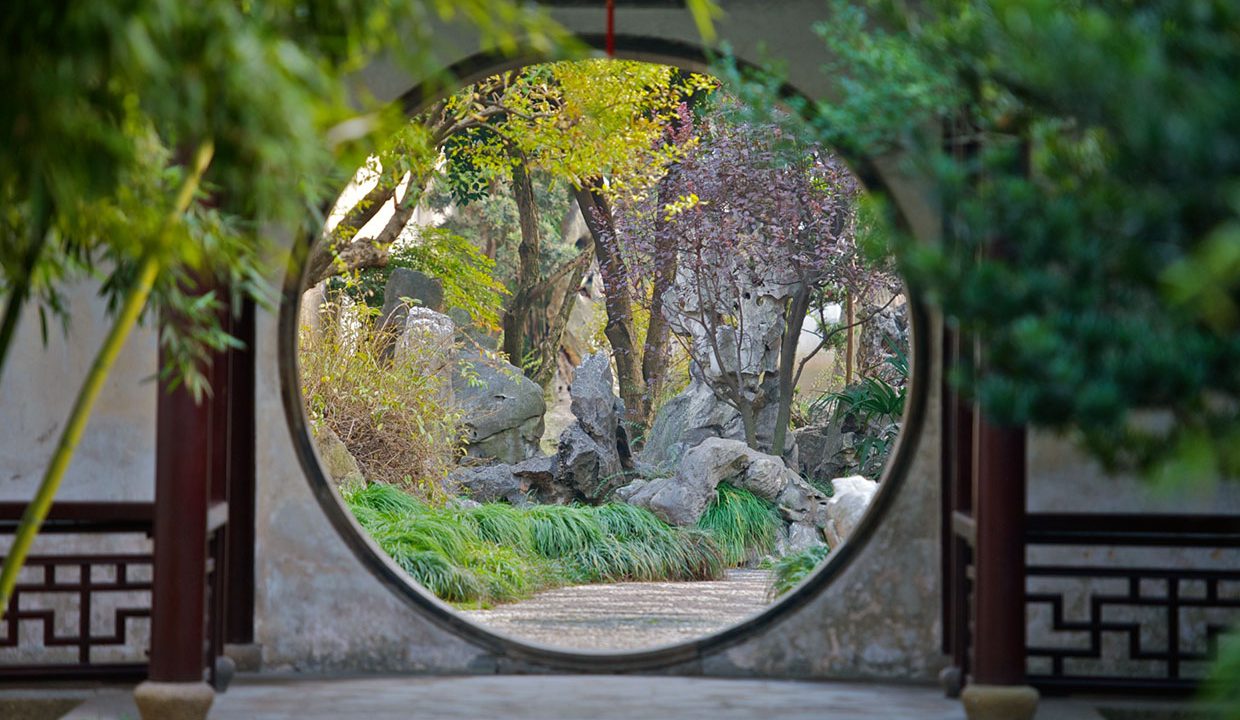